About A Chorus of Women

We stand in the ancient sacred lineage of the chorus.
As women citizens we sing out in the theatre of life
commenting and telling what must happen.

We affirm the citizens' place in the public life of our country.
We give voice to matters at the heart of our communities,
weaving integrity, compassion and respect for the Earth
into Australian democracy.

Honesty, clarity and wisdom are our aims,
artistic expression a means to these ends.

We began when some 150 women filled the foyer of the Australian Parliament with a song of Lament on 18 March 2003, the day Australia's intention to invade Iraq was announced. Our first song, by Glenda Cloughley and Judith Clingan AM, was witnessed on national media by millions of Australians.

Open the doors of the chambers of your hearts
Open your minds to our song
We sing for peace through the power of love
Hear the wisdom of women, hear our song

Weep for our sisters in danger
Weep for our brothers and children
Sound the cries of grief and despair
Sound the lament for the dead.

These words of 'Lament' were twice read into Hansard. A section of a Parliamentary Library essay to mark the twentieth anniversary of Australia’s Parliament House, was devoted to this first event of a Chorus of Women. Click here to read the essay, 'Parliament House and the Australian People' by Scott Bennett. Click here to listen to a recording of 'Lament' in the Australian War Memorial.)

We have continued to sing in public areas of the government buildings of our hometown Canberra as well as in city streets, work places, theatres, concert halls, pubs, universities, conference venues, art galleries, and places for ceremony and worship. Our songs have been broadcast and Chorus women interviewed for numerous Canberra and national radio programs.

Although social commentator Phillip Adams described us as 'the most controversial choir in Australian history' when he introduced us to his Late Night Live audience, our voice is non-adversarial. We try to listen for the wise course and weave the threads of humanity and equity more consciously into the fabric of Australian society.

A Chorus of Women in residence 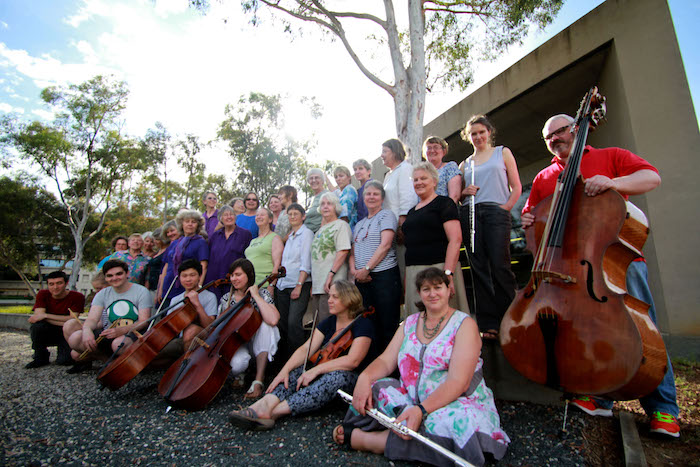 Since the beginning of November 2015 we have been meeting in rehearsal and performance spaces and our office in the beautiful grounds of the Australian Centre for Christianity and Culture.

Located at the edge of the Parliamentary Triangle on the southern shore of Canberra’s Lake Burley Griffin among several other national cultural institutions, the Centre is the Canberra campus of Charles Sturt University.

The residency began with the signing of a Memorandum of Understanding between Chorus women and the Centre’s Executive Director, Professor Stephen Pickard. The agreement recognises many years of shared commitments to seeking wisdom for the common good.  As ever, the Chorus maintains its independence and non-alignment with any religion or political group.

The Centre has welcomed our offer of ‘skilled use of the arts to engage the community in public policy dilemmas by portraying the ethical dimensions of issues and foretelling the human consequences of decisions’.

The Chorus and Centre are both committed to respecting all spiritual traditions.  Among our shared active interests are peace making, relations between people and Earth, reconciliation and respect for Indigenous Australians, speaking out about violence against women and children, engendering wise responses to refugees and climate change and regenerating wellbeing in the spirit of our city as our hometown and our national capital. The Centre's website is www.csu.edu.au/faculty/arts/accc.