A Chorus of Women were delighted to win the 2022 ACT Chief Minister’s Rotary Peace Prize … and completely surprised.

We had gathered at the Canberra Rotary Peace Bell to sing for the International Day of Peace, as we do each year, with no foreknowledge that we were to receive the award.

The Peace Prize is given each year to an individual or group who have contributed to a more peaceful community – locally, nationally and internationally.

The Chorus was described as ‘an incredibly deserving recipient’ of the Peace Prize by the Chief Minister’s representative, Kareena Arthy.  She said we had ‘encouraged integrity, compassion, respect and humanity’ on hundreds of public occasions as we perform our original songs and spoken texts.

‘Your beautiful advocacy through song has been such an important part of so many key issues in this community,’ Alicia Payne MP said. ‘This is a fantastic and well-deserved award.’

All the speakers recalled A Chorus of Women’s beginning on 18 March 2003, when 150 Canberra women filled the foyer of the Australian Parliament with a song of Lament for the people of Iraq as Australia’s intention to invade Iraq was announced by prime minister John Howard.

‘Throughout history, small acts of courage and conviction have created ripples of hope and change the world for the better – like getting through the security of Parliament House to sing a song,’ Alicia Payne said.

Responding to the Peace Prize for the Chorus, Glenda Cloughley said the passions that have impelled Chorus action and music-making for nearly 20 years were peace, climate change, species extinction, expanding refugee crises and the horrific impacts of war on women and children. ‘We sing for peace in the world the grandchildren of our grand-daughters will inherit,’ she said.

Recalling the Lament for the people of Iraq, Glenda said, ‘In our action on 18 March 2003, we discovered that we had sung a song that was already in people’s hearts, like the longing for peace always is’.

Writing in Canberra online newspaper RiotACT, Genevieve Jacobs recalled the beginning of Chorus as a ‘songful act of sabotage’.

All three Chorus songs during the ceremony reflect the power of music to connect people.

Listen to our new recording of A Recipe for Peace by Glenda Cloughley.

Heiwa Heiwa Peace was being sung at the Berlin Peace Bell in songwriter Elke Bitterhof’s hometown as the Chorus sang our Sue Hoffmann’s English lyrics at the Canberra bell:

We loved singing Johanna McBride’s three-part choral backing for Mr Circle with singer-songwriter-diplomat Fred Smith, who won the 2021 Rotary Peace Prize. Written during his diplomatic post on Bougainville, Mr Circle is part of the success story of the world-first unarmed international peace-keeping operation after years of war on the island. (See Bougainville Sky for the 2004 film about Fred’s work.)

Japanese Ambassador Shingo Yamagami spoke of the origin in Hiroshima of peace bells around the world. Referring to present threats of nuclear war against Ukraine, he said ‘It seems that now, more than any other time in the recent past, the global community must act to ensure that the tragedy that befell Hiroshima and Nagasaki in 1945 – the hundreds of thousands of deaths resulting from the bombs themselves and their lingering radiation - are never, ever repeated’. 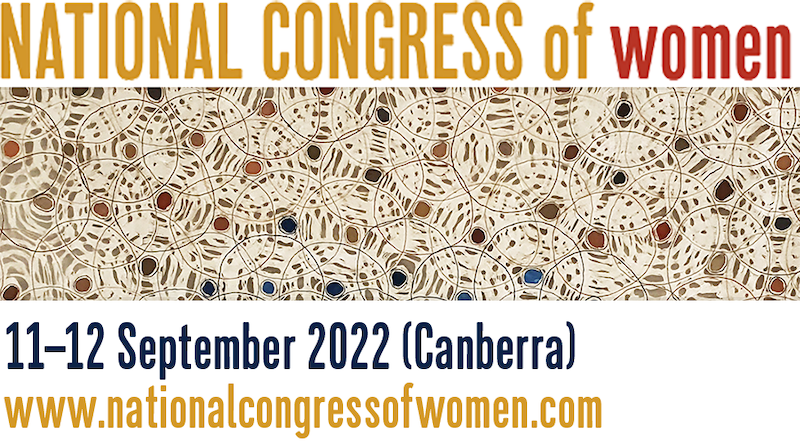 A women-led initiative for action on climate change

The National Congress of Women is an initiative of the Women’s Climate Congress to lead a nonpartisan women’s movement for collaborative action on climate change and to restore care for the Earth and nurture of life to the centre of all our action on climate.

With the overarching theme ‘How can women rising transform our response to climate change?’, the National Congress of Women (NCW) initiative has been developed in three stages. Two previous 1-day online events have explored the themes of 'Women Rising!'  and 'Weaving'.

We were excited to finally welcome women, in all our diversity, from all over the country to our long-awaited 2-day event in Canberra:

Renewal — How can we save the Earth for ourselves and future generations?
11–12 September 2022, Canberra
At Albert Hall, 100 Commonwealth Avenue, Yarralumla, Canberra (and online)

After a welcome to country by Ngambri-Ngunnawal Elder, Dr Matilda House, Glenda Cloughley introduced the ‘The Singing Hill’ – a prophetic story about women at Parliament House from the early 1990s when Jo Vallentine was a WA Green’s senator (see video below).

This two-day event built on the work of the Women’s Climate Congress over the past 2 years and was a unique opportunity to participate in building a women’s movement for change on the urgent global issue of climate change, and to bring as many women’s voices as possible to a ‘Women's Charter for Change’.

There were conversation sessions with former and current politicians, First Nations women, artists, community and business leaders. The first day closed with A Chorus of Women affirming our commitment to the Earth with Glenda’s songs ‘Hymn to Gaia’ and ‘The Promise’.

On the second day, the conversations broadened into group conversations among participants to review the Charter themes and develop plans for action to bring about change. The event closed with participants joining in with the Chorus. We all sang Ubuntu, a well-loved Chorus song that speaks about our human interconnnectedness as well as with the Earth and the web of life.


Reports and recordings will be available on the National Congress of Women website.

Unknown to the dark suits shouting within
The women are returning ...
And the chanting is beginning
The humming has begun

In 1991, Jo Vallentine read a prophetic poem to her fellow Senators about women rediscovering the harmony of the hill singing beneath the Australian Parliament. To most parliamentarians and workers in Parliament House the words by Jo’s visionary Canberra friend Dorothy Cameron probably seemed like far-fetched fantasy. But not in 2021!

Kurrajong or Capital Hill is a women’s place in Ngambri-Ngunnawal country. And women all over Australia are recognising themselves and the rising spirit of the time in a new Chorus video that brings the story of The Singing Hill into life.

The story is told by Chorus composer Glenda Cloughley, who was also close to Dorothy Cameron (1917-2002). Glenda said she had read the poem a thousand times in the 25 years since Dorothy gave her a copy.

‘Dorothy told me about writing the poem. She also wondered if I might be able to hear its music,’ Glenda said. ‘With the 2021 March for Justice and the rise and rise of strong women’s journalism about the need to transform parliamentary culture, I decided to set some time aside to listen again.

‘The music was there, waiting for me.  I just had to write it down.  It was more or less all written in half an hour.’

‘This was a heartening project as we moved through the last lonely weeks of the lockdown’s choral silence into being able to sing together and the lovely collaborations that keep the Chorus alive.’

Janet Salisbury invited Chorus to present The Singing Hill at the Women’s Climate Congress 2021 online national conference. Johanna McBride and Glenda planned the recording with sound engineer Danny Pratt from With Love Records. Jo Vallentine agreed to read the poem for the recording. Johanna, Glenda and Meg Rigby workshopped the choral parts. Visual artist Sally Blake began attending music sessions, listening for the images she would make from original drawings and photographs to incorporate in the video. There was much joy in Chorus with Johanna leading rehearsals, first with masks and then without. Janet and Glenda had conversations about Kurrajong (Capital) Hill with Matilda House, senior Ngambri-Ngunnawal elder. Danny recorded the Chorus and made the magical soundscape. Sally bound the sound and visual elements together in the beautiful video.

The premiere screening was to a receptive, grateful online audience of 200+ women during the first day of the National Congress of Women organised by the Women’s Climate Congress on 30 November. You can read the poem here.

... You are not alone, we're singing with you
We hear your voice. Hey, that's our song too!
All around the Earth the women are humming
and the song of the Spring is rising

If they hurt you Malalai, they will not kill your voice
You're a song of the women in every place
They can cut the flower, but they can never stop the Spring
The buds are opening in our gardens too ...

These words are from our song 'Love Has a Voice', which is dedicated to the women and girls of Afghanistan. With the Taliban's terrifying return to power in 2021 they are singing from all Chorus hearts to our Afghani sisters, including those who live in Australia and fear for loved ones in that war-torn country.

A Chorus of Women sang 'Love Has a Voice' to 28-year-old Afghan MP Malalai Joya at a moving 2007 UNIFEM Australia International Women's Day gathering in Canberra attended by 850 people.

A Chorus of Women directed by Meg Rigby

Malalai Joya had survived numerous Taliban assassination attempts by the time she visited Australia. Songwriter Glenda Cloughley was inspired by Malalai's statement: 'They can cut the flower, but they can never stop the Spring'.

... We sing for peace through the power of love
Hear the wisdom of women, hear our song.

We send our deep appreciation and support to all educators of Afghani girls and women, human rights defenders and journalists.

You can read the full lyrics and hear the song here. Here is a link to a August 2021 essay by Nobel Peace Laureate Malala Yousafzai, who became an international advocate for girls' education after she was shot in the head by the Taliban in 2012 on her way home from school.

A Chorus of Women commenting on the 2021 election


Just in time for the next Australian Election — A Chorus of Women called for the kind of politicians citizens crave!

Funny thing is Glenda Cloughley wrote the song six federal elections ago. The occasion then was a Chorus gig to encourage good women to stand for political office.

In A Chorus of Women we recall fondly the former Prime Minister joining the cast of 80 Canberra citizens in Old Parliament House for Closing Night of our 2010 Floriade Festival production of The Gifts of the Furies.  In front of a packed House of Representatives, Bob Hawke delivered the verdict in the trial we staged between The Furies of Earth and Lord Reason, with Ethos presiding. The trial scene is the centrepiece of The Gifts of the Furies, which our composer Glenda Cloughley based on The Eumenides, a Greek tragedy from 458 BCE whose happy ending follows the people's commitment to compassionate justice and harmony with the Earth. Bob Hawke loved the big story-song, declaring in an impromptu speech afterwards that ‘the environment is the Number One issue for me.' Read more about our performances of The Gifts of the Furies.

See Bob Hawke’s impromptu speech and his cameo role in the House he led as Prime Minister from 1983.
The performance video concludes with The Promise sung to Gaia by the Chorus of Citizens.

See excerpts of The Gifts of the Furies 2010