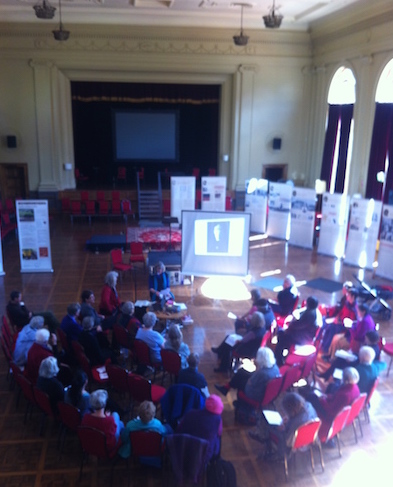 From Socks to Singers – The Festival for Peace 2015

Marilyn Chalkley and Glenda Cloughley sum up the week

The Albert Hall last week was filled with colours and stories and hope for the future in Canberra’s first ever Festival for Peace. Most of the stories were about women, from the million socks that were knitted  for soldiers on the front  in 1915 to the 1300 women from twelve warring and neutral countries who went to The Hague in the week Gallipoli was stormed, to try and negotiate peace at the International Congress of Women. So  worried was Winston Churchill by these ‘dangerous women’ that only a handful of British women attended – those who had left Britain before the ferries were stopped – so Australia’s hope of being represented were dashed. Chaired by Jane Addams, who went on to win the Nobel Peace Prize, those women would have been proud of their story being carried on 100 years later by A Chorus of Women.

The moving centrepiece of the Festival was Canberra poet–composer Glenda Cloughley’s A  Passion for Peace.  This new community oratorio told the story of the 1915 International Congress of Women within a present day context of a promise to future generations. Sung by over 50 women from the Chorus and 50 children from Arawang Primary School the choristers were joined by some of Canberra’s best-known soloists and an ensemble of instrumentalists under the skilful musical baton of Johanna McBride.

The children embodied hope for the future. They invited the audience into the ‘circles of love’, called for the story ‘that the great grandmothers told but history forgot’, and entertained audiences with their bird calls and the Telegram Rap – part of the choral work which sang of the telegrams that whizzed round the world to muster women to The Hague for the 1915 Congress – before pleading to ‘stop all war’ and inviting audiences to join their dreams for peace. 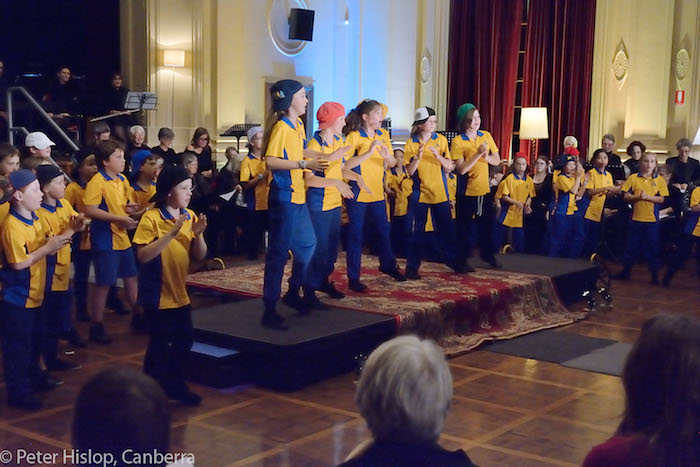 Three storytellers mourned the young men who went to WW1:

But the youngest was killed
and the two who came home
never dreamed, never sang again

There were tears in the audience as the poetry and music moved them with stories from Australian women whose men returned from war ‘heartsick, broken, silent’; and of other trauma stories from nurses in the field hospitals where men begged them to do something to stop war.

The words of the Sydney Morning Herald editorial of Christmas Day 1914 glorifying the young men who were going to fight was familiar yet ominous. The humanity expressed by women who exchanged letters across warring nations at Christmas 1914 ‘dreaming of peace on Earth’ also moved audience members.But, like the resolutions passed by the women at the 1915 Congress, the peace chorales sung by the Chorus looked forward,  and included Jane Addams’ words:

On three nights the songs echoed through the Albert Hall, which was lined for the festival with colourful peace quilts and banners, and ended in the joyous singing of the audience as a Citizens’ Chorus making a promise to the children of the next 100 years and a standing ovation of the full house on the last night. The word had spread on the significance of the Passion for Peace and on the last night there was a full house, and the audience gave the perfomers and the composer a standing ovation.

A Passion for Peace was not the only original musical work at the Festival. On Wednesday Judith Clingan in her indomitable fashion gathered the Canberra Children Choir and the Wayfarers in a concert – workshop encouraging people to sing new peace songs in Things are Changing.

On Friday evening Judith Clingan and Honey Nelson and others performed their Songs of Passion and Compassion. This was a concert of music about peace-making in the wake of repetitive, unconscionable warfare; and on behalf of refugees, Indigenous peoples, animals wild and domestic, and our own Earth.

Finding the ways to peace

The legacy of the 1915 International Congress of Women and the impact of the women’s resolutions on subsequent international organisations (including the League of Nations/United Nations and International Court of Justice) and human rights law was discussed at a forum on Wednesday evening. The forum was facilitated by Dr Janet Salisbury with contributions from Professor Hilary Charlesworth, Diana Abdel-Rahman, His Excellency Mr Jen-Luc Bodson, Ambassador of The Kingdom of Belgium, Libby Lloyd AM, Barbara O’Dwyer (WILPF National President) and Dr Glenda Cloughley. Contributions from the panel where followed by break-out discussions among the attendees and a thoughtful roundtable discussion that explored ideas for bringing more humanity into international relations. Hilary Charlesworth commented: ‘My taking from [the Congress at] The Hague is that groups that appear politically powerless can have an impact far into the future’. 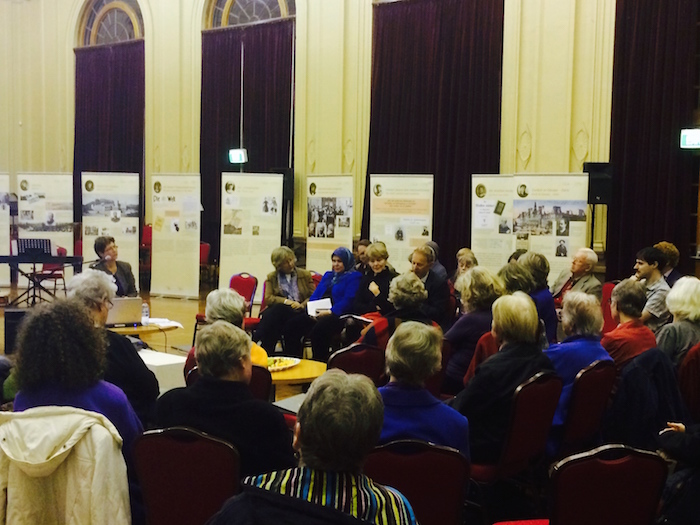 Women with a Passion for Peace

A look at history through the eyes of famous women in 1915 was started on Wednesday with Glenda Cloughley giving an inspiring talk on the many extraordinary women who attended the 1915 International Congress of Women, those who made the journey under very difficult circumstances, and the many who didn’t make it but sent messages of solidarity.

Later, women in Australia in 1915 were celebrated with a workshop facilitated by historian Lenore Coltheart, in which Vida Goldstein, Adela Pankhurst and Margaret Windeyer made brief appearances, courtesy of Lenore, Marilyn Chalkley and Jim Windeyer. The passion and commitment of these women meant when they spoke they were often the subject of ridicule, and cat calls, but Adela and Vida always maintained that their formation of the Women’s  Peace Army (We War against War) contributed to the defeat of conscription during the Great War. 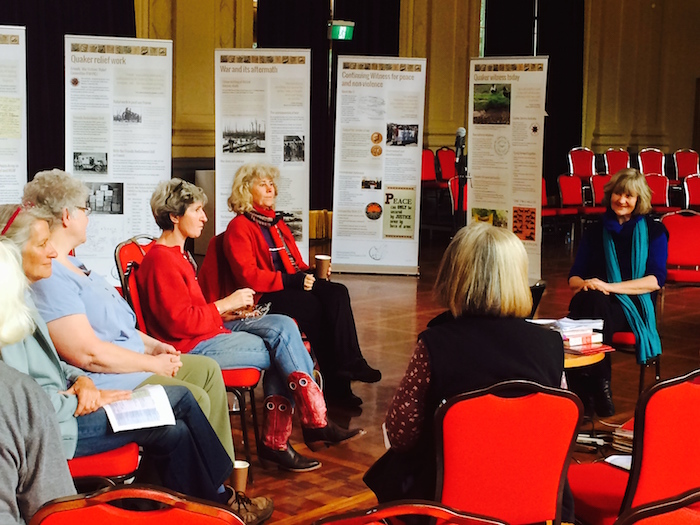 TheACT branch of theWomen’s International League for Peace and Freedom (WILPF),which was formed as a result of the 1915 Congress, mounted a day of workshops and speakers on the theme of ‘Women’s Power to Stop War’ (which was also the theme of the WILPF international centenary conference at The Hague), coordinated by Annie Didcott. Speakers included Kate Lee-Koo, Australia’s leading specialist on the important issue of Women’s Peace and Security and the National Action Plan; Libby Lloyd AM, a leading expert on domestic violence; Regina Mackenzie who hails from Bougainville and talked of the awful effects of war there and the role of the women; and Jackie Sutton who discussed the courage of the women in Iraq and Afghanistan. Jackie spoke of a comedy routine put on by Afghani women on 100 ways to use a burka (for example, throw it over your donkey when it’s hot, slip out of home incognito so the parents don’t know).

Seven women from the South Sudanese Women Choir drove down from Sydney for this session, and talked of their experiences in South Sudan, where many of them had lost husbands and children. These tall and vibrant women sang in memory of war and its traumatic effects, but also sang to thank Australia for accepting them as refugees, and for hope, as A Chorus of Women does. 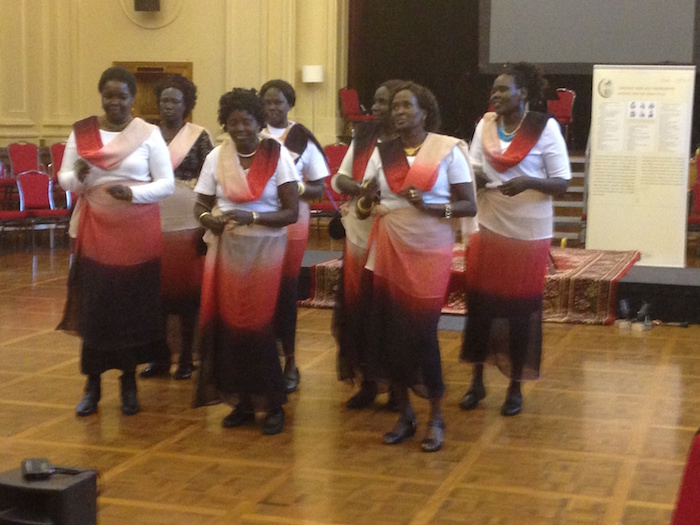 Music as a soother

The sadness of war returned on Friday when Chris Latham, musician and Anzac Fellow, talked with Glenda Cloughley about the emotional drain of researching and recovering the music written and played by men in the armed forces to try and calm and soothe their fellow soldiers while Glenda’s immersion in the stories she wrote for the libretto of A Passion for Peace meant she also had many moments of grief. Nonetheless hope won through, although Chris’s view that melody died with the musicians of the First World War was a fascinating reflection on atonal music and the brutal nature of composition in the classical genre since that time, which is only changing again now. 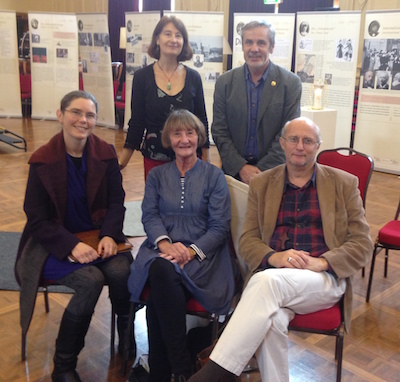 Why is peace important to climate change?

The links between climate change and peace, and the devastating effect of war on the environment were covered in a well-attended forum on Saturday, Peace on Earth — Peace with the Earth, with an eminent panel of Professor Kate Rigby, Professor Will Steffen, Associate Bishop Stephen Pickard, Dr Nicky Grigg and Anne Lanyon. Contributions from the floor demonstrated how many thoughtful and well-informed pacifists there are in Canberra, although the lack of the younger generation participating was seen as a challenge. Nonetheless there were many children’s activities during the week.

Broadcasts from The Hague

Throughout the week there were broadcasts from the WILPF international centenary conference, held in The Hague in the same week as the Festival for Peace. One could sit with a quiet cup of the excellent coffee from the canteen run by the CIT Students Association and reflect on the debates being held on the other side of the world – part of a global commitment to working towards peace. One could even jot down thoughts in the ‘Philosophers Corner’.

As well as assistance from artsACT for staging the performances of A Passion for Peace, the generous support of a number of embassies gave the Festival an international flavour. How pleased the women of 1915 would have been to hear Susanne Olberg, the Head of Culture from  the German Embassy make passionate opening remarks on the first night about the significance of the centenary of the 1915 Congress, and Her Excellency Mrs Annemieke Ruigrok, Ambassador of the Kingdom of The Netherlands, speaking before the Thursday evening performance.

The Peace Flame goes on burning

The World Peace Flame candle, lit in a ceremony before the opening performance of the Passion, burnt steadily the whole week – when one extinguished it at night, one had to fan it out – no symbolic blowing was allowed.

The entire Festival was put on by an enthusiastic band of volunteers from A Chorus of Women, led ably by Janet Salisbury, with stellar administrative assistance from Sarah Stitt and Meg Rigby. These women always knew everything. So many other women played key roles too, this Festival was a truly collaborative effort. The Festival tweeted and Facebooked throughout the week, while articles in the papers and interviews on the ABC and community radio got the message out to the broader Canberra community.

The Inaugural Festival for Peace was rounded off in the same way it started, with the magnificent music of A Passion for Peace, and a standing ovation.  So when is the next one? Watch this space.