Who is A Chorus of Women?

A Chorus of Women began with 150 of us singing the lament for the people of Iraq that led the 7.30 Report on 18 March 2003, when Australia went to war.

Eighteen plus years later, we are still singing up public wisdom. Peace, social justice and effective climate action are the matters of heart in our original songs, major productions and civic conversations.

A Chorus of Women was awarded the ACT Chief Minister's Rotary Peace Prize on International Day of Peace, 21 September.

In a lovely ceremony at the Canberra Rotary Peace Bell in Nara Peace Park, senior diplomats of 40 countries and representatives of the ACT Chief Minister and the Prime Minister witnessed the award.

Perhaps most moving was the spontaneous response of Iraqi Ambassador Dr Bassim Altomma to the story of our first song. The Ambassador leapt to his feet on hearing that 150 Canberra women had sung a Lament for his people in the Australian Parliament as the Government announced it was going to war against Iraq in 2003. Speaking of his immense gratitude, he asked to ring the Peace Bell with us (Read more on our News page). 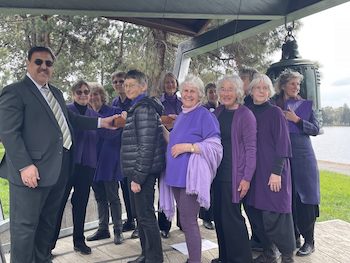 A Chorus of Women took part in the 2-day National Congress of Women hosted by the Women's Climate Congress at Albert Hall, in Canberra on 11-12 September.

After a welcome to country by Ngambri Elder, Dr Matilda House, Glenda Cloughley introduced 'The Singing Hill' - a prophetic story about women at Parliament House from the early 1990s when Jo Vallentine was a WA Green's senator (see video in the next column).

Unknown to the dark suits shouting within
The women are returning ...
And the chanting is beginning
The humming has begun

After the difficult months of lockdown it was wonderful to finish 2021 with the release of a new Chorus video that presents a prophetic women's story about Kurrajong or Capital Hill where Parliament House stands. Chorus voices joined storyteller and composer Glenda Cloughley in bringing The Singing Hill to life. Click on the image. 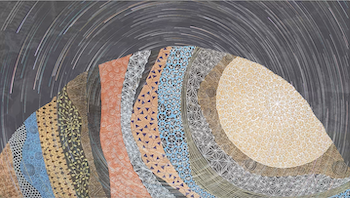 Next year it will be two decades that we have been singing to give voice to the concerns of citizens in our hometown of Canberra, around Australia and also overseas. Watch this space.

Have a listen to A Chorus of Women's recordings

Check out sheet music and recordings

EXPLORE OPPORTUNITIES TO COLLABORATE WITH US

We welcome opportunities to collaborate with other like-minded people and organisations. We have organised conversations, singing seminars, and have prepared artistic contributions to public events, as well as our own major choral works.